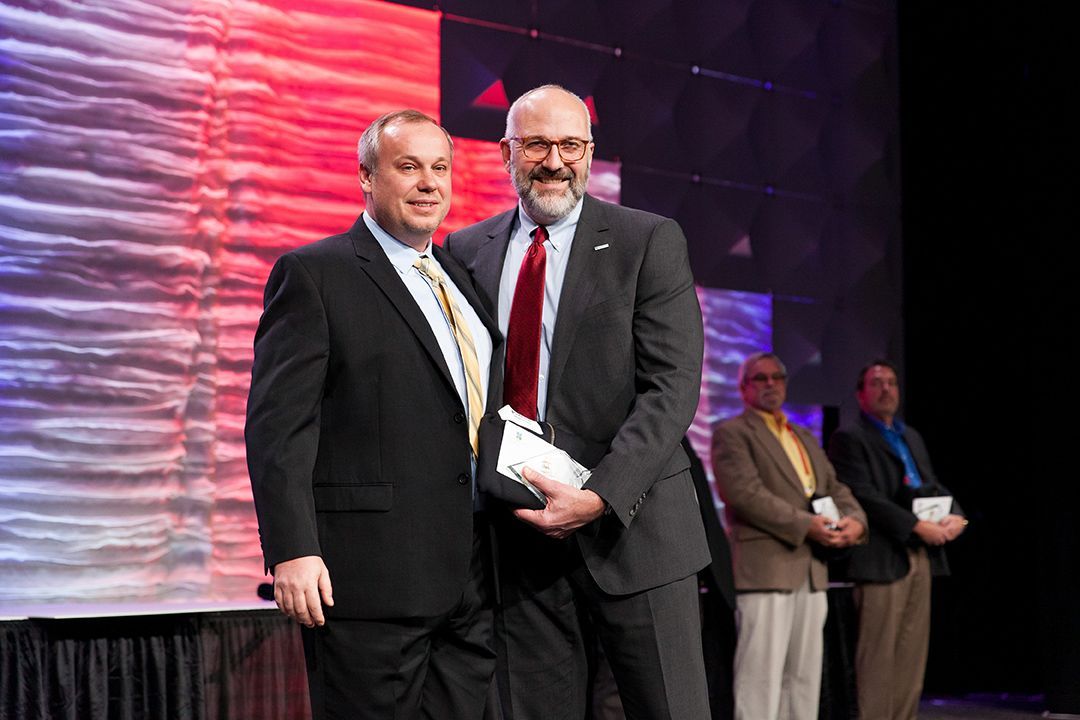 KPost is proud to announce our very own Piotr Lis has been awarded as a Most Valuable Player during NRCA’s 133rd Annual Convention in Dallas. Winners of this award are chosen based on their significant contributions in and outside of the workplace. The winners are chosen by a panel made up of roofing industry representatives who evaluate each nominee on their performance, workmanship, and other noteworthy contributions. Read on to learn more about Piotr and his outstanding contributions to our industry.

Coming to America to chase a dream with broken English on a specialty craftsman contract, Piotr Lis is nothing short of your ideal “go-getter”. At 19 Piotr decided he would officially follow in his father’s footsteps and head to New York City to take on any and every job a specialty metal craftsman contracting job that they had in store for him.

Piotr Lis grew up in Zabrze, Poland in the Silesia region. From a very young age, he was drawn to the art of metalworking due to the generations of metal craftsmen that

came before him. His uncle and father both were/are top metal craftsmen in the industry. As a young boy, he would find himself hanging around metal shops while they worked, learning the tricks of the trade. He would make himself swords, armors, and fancy toys as young at 6 years old. He was destined to become one of the top master craftsmen in his trade.

Throughout Piotr’s childhood, his father would come over to America (New York City specifically) on special craftsman contracts. Taking on any and every metal job that came up. At 19 Piotr decided it was in his best interest to follow in those same footsteps to jump-start his career, and it paid off tremendously. He started working in New York City, Brooklyn, and the surrounding cities picking up restoration projects, historical work, and anything epic that involved sheet metal.

As the years went on, he continued growing in his craft, learning from his father who had been doing the same thing for longer than he been alive. Piotr eventually ended up in Dallas, Texas working at high-end companies such as Sebastian Construction Group and Nationwide Slate, working on historical remodels, fancy renovations, and again epic sheet metal projects. If it looked difficult to do, it was the job for Piotr.

During his time in Texas, aside from working at construction companies, he also found himself running the metal department at the world-renowned Potter Art Metal Studios where he managed, designed, and crafted some of the highest-end pieces seen over North Dallas at churches, banks, residential homes, and courthouses. He was a teacher for the other employees at Potter, mentoring them on the design secrets Piotr had learned throughout his life from his father.

Two years ago, Piotr found himself at KPost Company, an ANSI-SPRI ES-1 certified sheet metal shop since 2011, coming on as a Sheet Metal Superintendent. He would come onto the team to manage 4 crews totaling 16 people. Piotr manages upwards of 21 projects at a time. Since joining KPost, Piotr has become a teacher and mentor for KPost’s sheet metal department, plus he leads the KPost University Sheet Metal class that runs twice a year for 12 weeks with each class having anywhere from ten to twenty students.

Piotr brought multiple teammates to KPost with him that he had been working with for multiple years. The men are talented craftsman and Piotr was able to disperse them into the other sheet metal crews currently at KPost to train and educate their peers as Piotr and his teammates had been trained. They teach the team the ways of safety in the sheet metal world, knowing that its always required to wear a harness, how to operate certain tools, and what hazards are associated with the materials. KPost puts safety first with monthly, companywide safety meetings to discuss specific topics. Everyone in the field is in attendance, over 300 people. Topics include heat stress in the summer, chemical safety, fall protection training, fire safety, PPE, etc. Piotr and the sheet metal crew are no stranger to safety as their department is one of the most dangerous. Large gusts of wind could catch the large panels of sheet metal and take your team with it or being on the edge of a roof or on the side of a building, a harness is always worn. They are either leaning over a building or working on scaffolds and boom lifts to complete their jobs. It is one of the most dangerous jobs in the construction industry. KPost and its emphasis on safety from the top of the company to the bottom have allowed it to have received a .49 Experienced Modification Rate this past year thanks to its team members always being safe on the job. With large jobs, a permanent safety representative is sometimes mandatory for us to provide, which is always done. The crews understand the importance of safety in our business. Piotr and his team made a great first impression on a company always looking for skilled craftsmen.

Piotr would quickly rise to the top as one of the most skilled metal craftsmen at KPost, if not in the DFW Metroplex. He has been apart of some major projects already in his short time at the company. Major projects include The Davis Building – Cupola Roof in Downtown Dallas, 1401 Elm Renovation Project, East Quarter, Grapevine Station, and The Shops at Highland Village (2 months behind when given to him, night work, winter cold weather and rainstorms, and he and his team finished on time and on budget).

Piotr has brought a lot to KPost since he arrived. He brought his work ethic, his skills, and he also brought some creative/innovative ideas for projects as well as the company as a whole. During his projects, he has gained trust from his partners to be allowed to design components of the roof by himself. Architects and engineers will approve his work and give him the green light every time. For instance, at the Davis Building – Cupola roof, the previous copper cupola roof was fully attached to the building and Piotr saw problems in doing the same thing with the new system. Finding it a much safer and more effective way to do it his way, he proposed creating supports that would attach to the structure where his copper roof would then attach to the support. The copper dome roof would not attach directly to the structure this time. The architect and engineers approved.

Piotr also makes sure the work he is doing is not going to waste. He will create a piece as a mock-up and make sure confirmation is had from the GC or owner before forming all the other pieces. Once the mock-up is approved, Piotr and his team will fabricate 1100 feet in 26 hours and start the installation process. This is not only cost saving for the company but time-saving for Piotr. If he would make all the pieces and the design get denied, he would have wasted time and money.

Piotr has proposed many training courses within the company to train a selected group of sheet metal mechanics about basic trigonometry, layout technics, soldering techniques, how to use specialty tools, programming, and operating machinery, and more. He is not just thinking about himself and his self-growth but genuinely cares about the growth of the company and the people he works with.

Piotr continues to grow every day not only at KPost but in his personal life. He has a wife, Daphne, of 17 years and lives with her and his 11-year-old son, Henry, in Plano. He is currently enrolled at The University of Texas Dallas working on completing his Electrical Engineering degree. Piotr with his forward-thinking is excited to use this degree with KPost and open new lines of business and opportunities for the company.