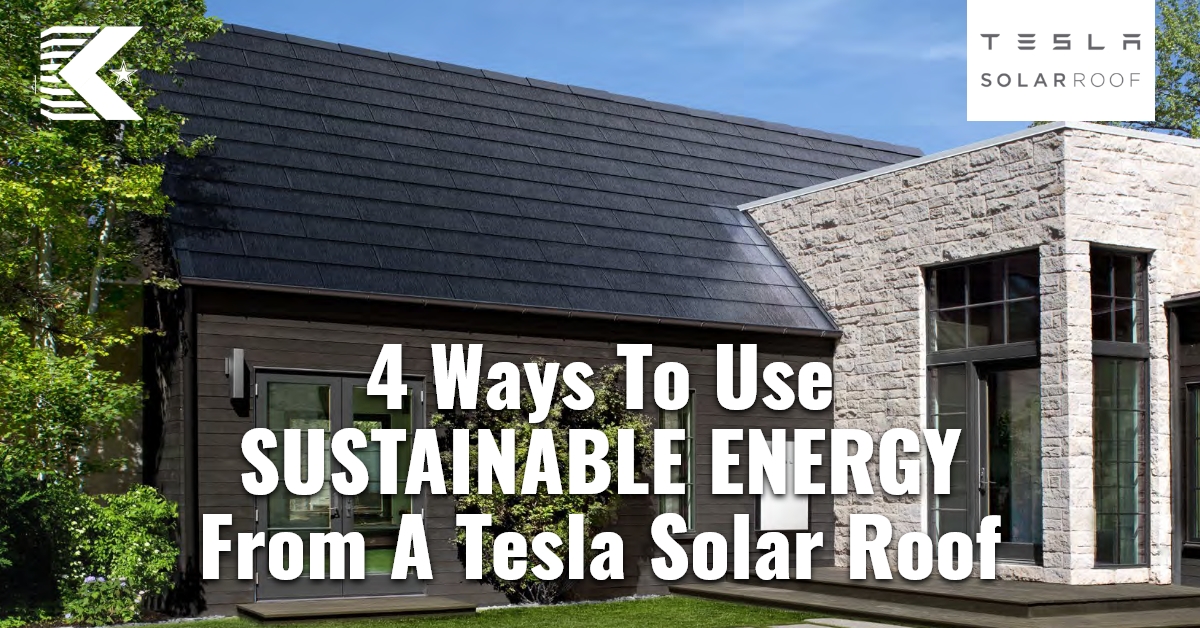 Tesla Solar Roofs produce green energy used to power your home. They can save you money on electricity, allow you to go off-grid, and help reduce your carbon footprint. Customers sometimes wonder how exactly their roof connects to and powers their home.

There are four ways to use sustainable energy from a Tesla Solar Roof. Your home may be able to use power in some or all of these ways. It depends on whether you’re connected to the public utility and whether you have a Tesla Powerwall. (We’ll share more about the Powerwall later on.)

1. Directly from the Roof

2. From the Tesla Powerwall

Your Tesla installer can design a Tesla Powerwall system to meet your home’s needs. They can install up to 10 Powerwalls, but most homes require far fewer than this. If your home is still connected to the utility as a backup, you may only need one or two Powerwalls. If you’re disconnected from the utility, your system designer may recommend additional Powerwalls to ensure you never lose power.

3. Direct from the Utility

If you don’t have a Powerwall and your Tesla Solar Roof isn’t generating power, the gateway will pull electricity out of the power grid. This happens at night and on cloudy days.

This setup is easy to implement. It doesn’t require extensive electrical work in your home, and you don’t need to purchase a Tesla Powerwall.

One key advantage of having a Tesla Solar Roof and Powerwall is the ability to power your home during a storm or other public power outage. You don’t even need a generator! Homeowners often see this benefit as a safety feature, but it’s also an excellent convenience.

If you are completely off-grid, your electric system will keep working the same way as always when the public power goes out. The gateway will pull power directly from the roof or the Powerwall.

The gateway will recognize the outage if you are connected to the grid and the power goes out. It will respond by drawing electricity from the Tesla Powerwall or directly from the Tesla Solar Roof. With this setup, there should be no interruptions in power. Your appliances, lights, and electronics should keep functioning as usual.

Tesla Solar Roofs are incredibly versatile. They can be set up and used in a variety of ways. If you’re interested in installing a Tesla Solar Roof on your home, the first step is to talk to a Tesla installer. Tell them about your home and energy needs, and they can make recommendations for your system setup. In many cases, installing a Tesla Powerwall is recommended to make your system more functional. However, you can still enjoy many of the benefits of solar without a Powerwall.

Contact KPost Roofing & Waterproofing in DFW Metroplex and Southlake, Plano, Dallas, Denton, and Ft. Worth. We’ll schedule an estimate and help you decide whether a Tesla Solar Roof is right for you.